skip to main | skip to sidebar

An current overview of anime in Japan

I was asked by MTV's new English language site devoted to Japanese music and pop culture to do a feature outlining general trends in anime in Japan to act as a sort of introduction for overseas readers. The site, MTV 81, is primarily designed to promote Japanese culture and everything they publish starts from the point that it's all going to be basically positive, so don't expect to find me ranting and raving about the evils of moé or calling Makoto Shinkai a sentimental faux artistic hack. Anyway, it's posted online here if you're interested.

Also, I started from the assumption that readers are going to have some idea of what I'm talking about since anime is pretty widely known and the kind of person who comes to a Japan-orientated site like MTV 81 is probably going to have at least a fair idea of what to expect from anime. If there are any truly egregious errors, I apologise (yeah, I know "Bakemonogatari" has a typo in it), but I tried to be as fair as I could in my assessment. Of course I'll have left out loads of stuff, and I admit I've been pretty much dead out of anime for the past few years, but I was able to field a lot of pointers from mates Wah from Analog Housou/Mistakes of Youth and especially Matt from Colony Drop (bearing in mind the obvious biases those sources entail).
Posted by dotdash at 06:59 4 comments: Links to this post

I wrote a review of the terrible new Resident Evil: Damnation computer animated movie for Otaku USA Magazine and you can read it here.

It's great getting paid money to say stuff sucked. I actually quite enjoyed the film, but it's important not to confuse that with it actually being any good. It really was poor, but it was poor in a sort of, "What the fuck is going on?" and "I can't believe they actually thought that would be a good idea!" kind of way.
Posted by dotdash at 20:47 No comments: Links to this post

Last week I did a small pop-art exhibition with a friend of mine and produced seven new illustrations. Some of them worked better than others, but in any case, it was a fun thing to be involved in. 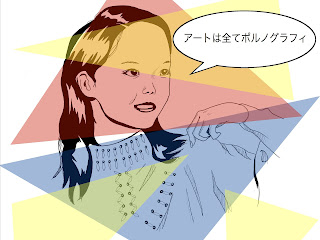 "All art is pornography."
No story behind this one, it just is. It's also probably the worst illustration out of the bunch. It just didn't quite work somehow. My wife says she looks like she has Down Syndrome, which seems a bit mean but now she's said it, I can't get the idea out of my head. 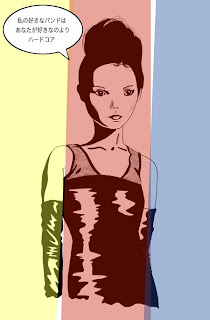 Those conversations about music where you end up trapped in a stupid battle of one-upmanship. 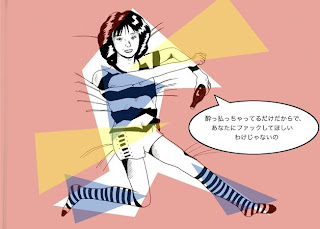 "Just because I'm drunk, it doesn't mean I want to fuck you."
Date rape. Don't do it. 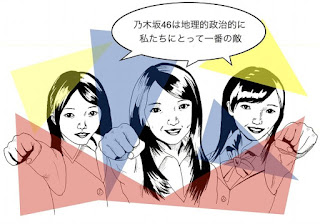 "Nogizaka46 are our no.1 geopolitical enemy."
I remember Mitt Romney saying something like this about Russia during the U.S. election campaign, which struck me as deliberately constructing a false enemy for his own benefit. This image came from an AKB48 (mass-member idol pop group) coffee commercial and Nogizaka46 are AKB48's "official rivals", despite being produced by the same guy and the money basically flowing to the same place. 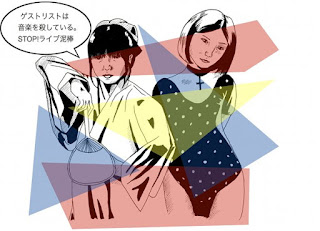 Record industry types are constantly bitching and whining about how downloading music is "stealing", but if getting music for free is theft, then every time a music industry shill gets on the guest list, he's stealing music too. The last line is based on the slogan "No More! Eiga dorobou", which comes from these stupid commercials you see at the cinema here with a guy with a camcorder for a head warning us not to steal movies. 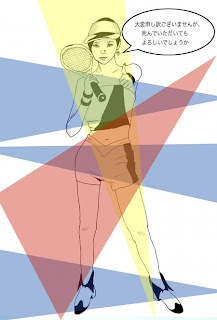 "I'm sorry for the trouble but I'm going to cause a terrible inconvenience by killing you."
The event title was "Kill Your Sempai!" "Sempai" is a Japanese word for someone who is your elder or senior in college or your job or wherever. They have a sort of master-apprentice role and you nave to use certain polite language when addressing them. So the joke here is that if you're going to kill your sempai, you must make sure you do it using the correct form of respectful language. I thought about giving her a Kalashnikov or something, but I thought this way is more fun since it leaves the intriguing possibility that she's planning to beat the guy to death with a tennis racket. 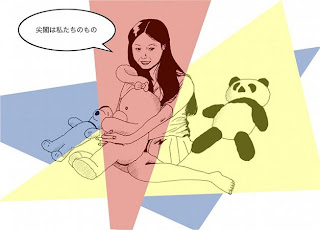 "The Senkakus are ours."
The question is whose though. The Senkaku Islands are this group of uninhabited rocks that are claimed by Japan and China. It's a really acrimonious political issue, but in this picture, there's an ambiguity over where the girl is from. I actually used the 1970s singer Agnes Chan, a Hong Kong singer who was phenomenally popular in Japan, as the model for this one, although I guess since she was popular in the 70s, that means she was neither Chinese nor Japanese. Maybe this is actually a comment on British imperialism instead.

Actually, this came from a conversation I had with a student. She said she can't listen to Korean pop anymore because when she sees them dancing on TV, she just knows they're all thinking, "Takeshima (yet another island dispute Japan has, this time with Korea) is ours" while they take Japanese money. I thought this was kind of strange, the idea of such meaningless, bubblegum pop music being tied in with political nationalism, but in a way, both are equally fluffy and inconsequential, so perhaps it's an appropriate connection.
Posted by dotdash at 20:40 No comments: Links to this post

Labels: art and design, Me Me Me
Newer Posts Older Posts Home
Subscribe to: Posts (Atom)

dotdash
I'm a writer, indie music busybody, owner of Call And Response Records, and surly expat based in Tokyo. Plot Shield is a space for my thoughts and writings about the geekier aspects of pop culture and my frequent frustration with them, with a particular emphasis on what I see around me here in Japan. Note: Content on this site is generally safe for work, but I make no guarantees about linked material. Articles also regularly include spoilers. I assume all my readers are adults.